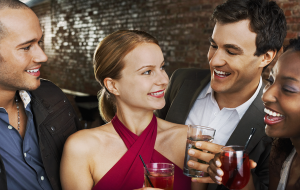 Is there a guy you really like but you’re just not sure if he feels the same? Do you wonder if you should be more obvious with your intentions or wait to see if he makes a move?

Reading guys can sometimes not be as easy as some people say. With some guys it is obvious that they are captivated by you, however, other guys can be particularly hard to read.

You need to be clear before you decide to make a move on a guy, or you run the risk of embarrassing yourself in front of him and maybe others too.

But don't worry, if this describes what you have been going through recently, then this guide will help you to recognise some of the most common signs that a guy likes you.

1. He Asks You Lots Of Questions

When a guy asks you questions, it is showing that he has an interest in what makes you tick. Respond by giving him small tidbits of information that he can build on. Make sure that you do not shut him out, while also protecting that you do not reveal too much too fast.

Giving him just enough to keep the conversation going but not so much that he knows your life story is the key. Keeping an air of mystery about yourself will cause him to wonder about you when the two of you are not together.

It is also a very good tactic to save some juicy things about you for later on down the line. If he finds out that you are also a professional piano player a few months after already knowing for example, will make him think that you are modest. It also shows that you are secure enough in yourself not to feel the need to blow your own trumpet.

2. He Finds Similar Interests with You

When he is asking questions, it is likely that he will look for things the two of you have in common. A guy that is wanting to get to know you better will find those topics of mutual interest, and work those into the conversation, and potential plans.

Listen for the ‘me too’ exclamation from his lips when you tell him things that interest you. If he is keen to impress you, then he will be eager to find the commonalities between you and let you know about them.

3. He Leans His Body in Close

One of the clues that can turn up the heat is how close he gets his body to yours. He may not even realise that he is leaning in closer, enthralled by your presence.

If he is leaning in when you are talking, then he is sub-consciously investing in what you are saying and does not want to miss a word.

Related article: How To Tell If A Shy Guy Is Into You

4. He Alters His Behaviour Around You

This one can be more difficult to detect if you do not know how he behaves when you are not there. If you have had a chance to observe him from afar and then he seems to act differently around you then it can be a clue.

However, if you have many of the same friends and acquaintances, then use this to your advantage. If they tell you that they can see a transformation in him when you are there, this could be a good sign that he is into you.

5. He Completely Ignores You

Yes, if he feels an attraction to you he may also ignore you completely. It is usually shy or less confident guys that do this when they are unsure if the girl likes them back. If he is doing this, don’t take it personally as it is more than likely that he is just a little shy to be around you.

In this case, it can work wonders for you to break the ice a little and start an innocuous conversation with him. If he then seems keen to talk to you then it’s quite likely he digs you.

6. He Turns His Body Toward You

Body language is a huge part of communication, and if he turns his body toward you when you are talking, it is a huge indicator that he is interested in getting to know you better. The open chest area facing you is a sign that he is willing to become vulnerable in your presence.

Eye contact is sexy and hot, when the other party is someone that you find attractive. A guy that is into you may be unable to keep his eyes away from yours. After all, they say the eyes are the mirrors of the soul. Perhaps he is seeking to see if you are his soul mate.

Some guys are shy and are insecure about making eye contact. Therefore, they may look away from you because they feel a sense of nervousness when they connect with you.

If the guy looks away from you by looking down then, it can mean that he feels inferior to you and may be a bit of a pushover. However, if he looks away by first looking to the side, then he is secure and confident in himself.

See also: Learn How To Talk Dirty To Your Boyfriend

9. He Smiles Excessively During Your Conversations

When a guy is really into a woman, they may just smile a great deal during talks. If he really likes you, it is possible that he will mostly nod and grin while you speak.

A real giveaway is to look to see if his eyes are also smiling. The eyes can’t lie so if he also has a hint of a sparkle then chances are he is enjoying what he is looking at in front of him.

Smiling is generally perceived as attractive by most people as it shows a more open and friendly side to the person. Men also find a smiling woman attractive also and can help you to be attractive to men.

10. He Agrees with Your Statements

To let you know that he thinks highly of you all the way around, he may agree with most of the things that you say. For instance, if the group is trying to figure out dinner plans, he will likely go along with your restaurant suggestion, even if it is not his favourite.

11. He Becomes Nervous When You Are Around

If he seems somewhat nervous in your presence, then there may be a good reason for it. Try to get an idea as to whether he is a naturally nervous guy. If not then the reason for his nervousness is probably you.

12. He is Always Attempting to Impress You

It can be so boring when someone keeps talking about themselves and all the things they’ve done. However, if he is doing this, then he may be looking for ways to make a mark in your mind and heart.

Some guys also try to show off or be funnier than they are. As off-putting as this can be, he is probably doing it to impress you.

Related Article: How To Quickly Become More Attractive To Guys

13. He Initiates the Conversation

If he is always seeking something new to discuss with you, he may be interested in getting to know you better.

14. He Lingers His Gaze for Just a Bit Longer

If you notice that he keeps his eyes on you just that little bit longer at the end of a conversation, it may be because he is having a head time drawing his attention away from you. A lingered look can often be a sign of curiosity and intrigue.

15. He Compliments You Frequently

While some men compliment every woman they encounter, most only give compliments to those that are special to them. If he notices your new dress, shoes or hairstyle, it could be a clue.

However, if he is commenting on deeper aspects of you such as your posture, your voice or the way you think about things, then he is captivated by you.

16. He Touches You Often

Not in an inappropriate way, but he may graze your hand to get your attention or something similar. A frequent and innocuous touch on the hand or shoulder helps to build rapport and closeness. He is probably doing it unconsciously and feels drawn to make that connection with you.

17. He is a Bit Closer Than Necessary

A guy standing closer without getting in your space is a clear clue that he is into you. Men and women do this, usually without realising. If you are in a group, then they are hoping that they will be the one you will talk to next.

If it is just the two of you, then they dig your energy and enjoy being in your presence.

18. He Gives You a Nickname

Nicknames are an endearing and cute way for people to show their affection. If a guy has given you a nickname, it is a sure sign he thinks you are special.

Another sign is if he occasionally calls you by your full name. Doing this means that he is intrigued by you and sees you as unique.

He may also be doing it in a playful way to make you smile as it is rather unusual for acquaintances to call each other by their first and last name.

19. He Remembers the Details

Does he know what your favourite flower or comfort food is? If so, he may like you a great deal! A stronger sign is if he remembers the little things you said or the things that are important to you.

20. He Asks Others About You

Guys will not waste their time asking friends and associates about a woman that they do not find desirable. If he is asking about you, there is certainly a reason.

21. He Does Not Talk About Other Women

Does he seem uncomfortable discussing past relationships or even the women that he might find desirable today? If so, it could be because he does not want you to think that you have any competition for his affections.

Dating is a complex maze that can often seem overwhelming. Figuring out whether or not a guy even likes you can be frustrating, and cause you sleepless nights. However, this article will help you to determine if the guy you like has the same feelings. If so, then you can move forward from there letting him know that the feeling is mutual.